A vintage electronic carillon history from Bells of America.

The History of
Electronic Carillons

Some of these electronic carillons strove to replicate cast bronze bells using recordings, while others projected bell-like tones created through different techniques.

Effects of the World Wars on traditional bronze bells.

Before World War I, the United States boasted many bell foundries that forged traditional cast bronze bells for towers and steeples. With metal shortages resulting from international conflict, many foundries were retooled to make weapons. In some cases, raw materials used to make bronze bells were redirected to other manufacturers for war-time purposes, creating shortages of essential bell metal alloys such as copper and tin which comprise bronze. 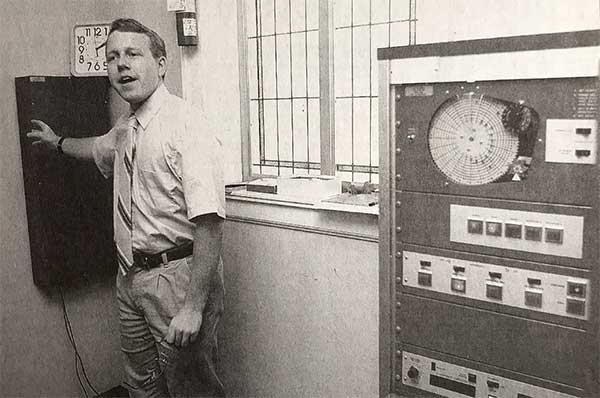 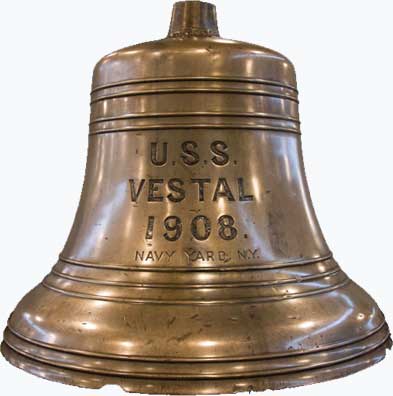 What is a Carillon?

A carillon is a musical instrument comprised of bells typically made of cast bronze. A bell in a carillon produces a singular note.

Bell instruments of more than 23 bells are typically considered “carillons".

Instruments from 11 to 22 bells are considered “chimes”.

Eleven bells are the minimum quantity with which basic musical arrangements can typically be played.

Bell sets with less than eleven bells are typically used in peals of bells for Change Ringing or rung randomly at varying speeds for celebratory purposes. Peals typically chromatically complement one another within the musical scale so that the random or timed pealing blends harmoniously.

A carillon contains at least 23 bells.

Campanology is the study of bells. It encompasses the technology of bells – how they are cast, tuned, rung, and sounded – as well as the history, methods, and traditions of bell-ringing as an art. 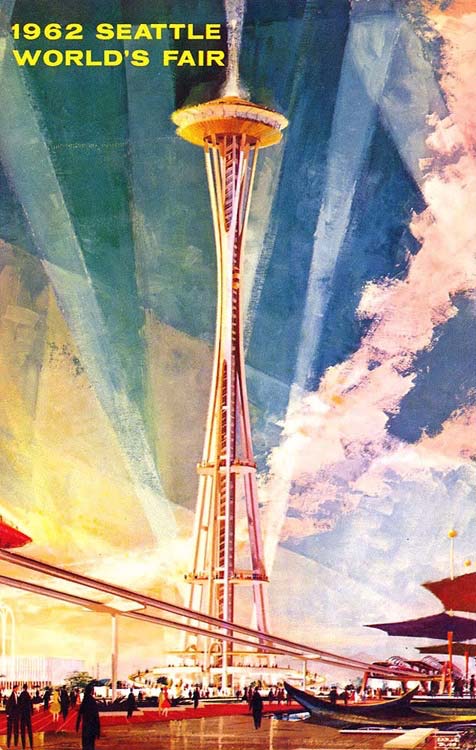 The influence of electronics, architecture, and modernism on electronic carillons.

In addition to the art of bell casting leaving the United States, the post World War II period ushered in an era of electronic progress, architectural experimentation, and an embrace of modernism.

These new designs coincided with the efficiency in space that electronic carillons offered compared to their traditional cast bronze counterparts of previous generations. Saved space allowed for a more streamlined and fluid architectural form in tower design, with less massing required for a cluster of physical bells and their related ringing and mounting equipment.

The length of the metal tube dictates the length and diameter of the note that is created when struck. Orchestral chimes, wind chimes, and doorbells are similar in tonality. One manufacturer used aluminum as its principal metal alloy in tube manufacturing. Another company manufactured its chime tubes with plugs at the bottom.

Several electronic carillon companies also offered electric damper options on many of their early chime sets. This function would allow a keyboardist to mute a chime's overtones by depressing a pedal, not unlike a piano string damper but functioning entirely electrically.

Other optional mechanisms did the dampening automatically with an adjustable delay function after each note was depressed or by flipping on a toggle switch as needed.

Each electronic carillon company boasted a more desirable sound over the other with some products being more resistant to cracking due to manufacturing differences.

In carillon applications, tubes were often suspended where they normally would be in an organ, loft, or on a wall within a church sanctuary.

Each tube would be outfitted at the factory with microphonic electro-acoustic pickups. These pickups would feed into a mixing vacuum tube pre-amplifier. This amplifier would accentuate a fairly imperceptible signal by several thousand times and transmit the enhanced volume over a wire from a secondary higher-powered amplifier to tower or roof-mounted projection speakers. Thus these apparatuses were the beginning of the American electronic carillon lineage. 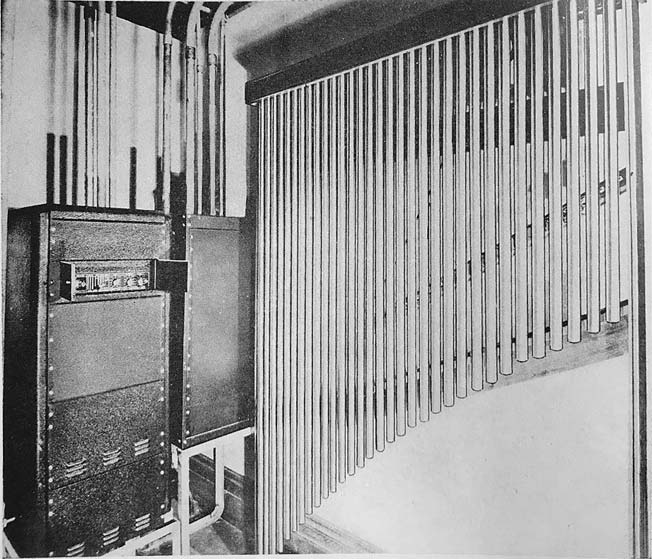 Chime rods in free-suspension, employing amplification of an electronic organ.

The Evolution of
Electronic Carillons

As electronic carillon technology evolved music experimentation followed. Multiple companies all came out with variations of metal rods tuned to create bell-like harmonics. In a similar application to organ chimes, these metal rods were struck by individual solenoid strikers. The striker plunger might be tipped with a hard point all the way to a padded felt tip creating broad variations in tonality and brashness on the attack. 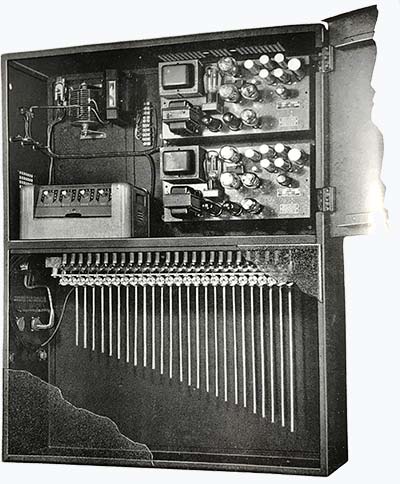 The largest organ-type electronic carillon console systems were often integrated directly into an organ-type console. Several pipe organ companies manufactured the large wooden consoles for various electronic carillon manufacturers. The stops, keys, and pedalboards were typical to pipe organs but with custom engraving for stops and controls. Smaller systems might only contain twenty-five notes of one of the voices. 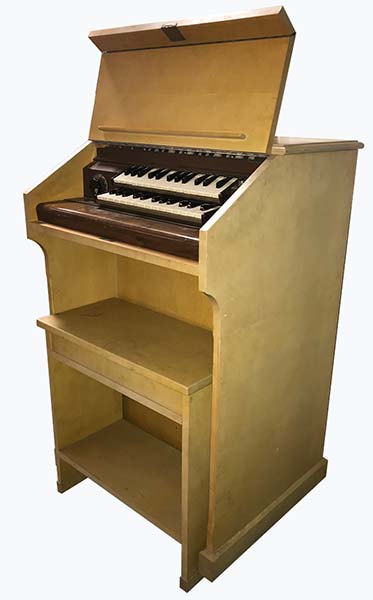 View of struck rod chimes mounted in the back of the console.

Smaller electronic carillon consoles would often have a small keyboard attached to the organ console that would swing out for the organist to play the chimes. Some exceptions involved a hardwired stop with the carillon directly integrated into a pipe or electronic organ. 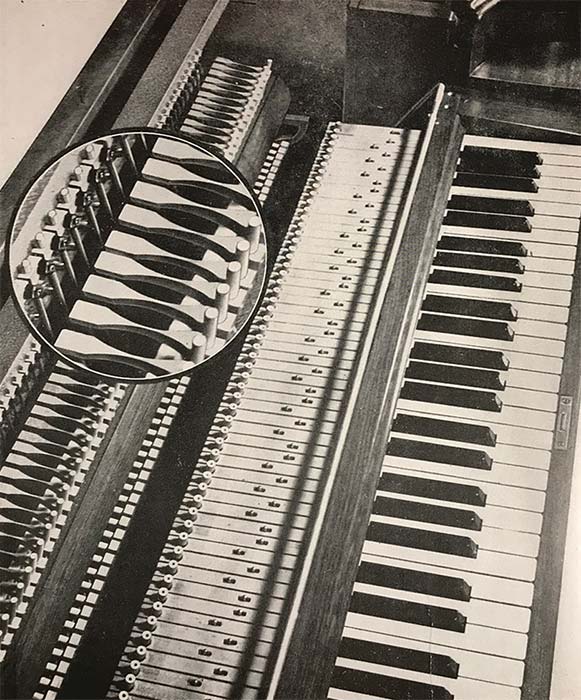 Inside view of an early electronic carillon keyboard console. 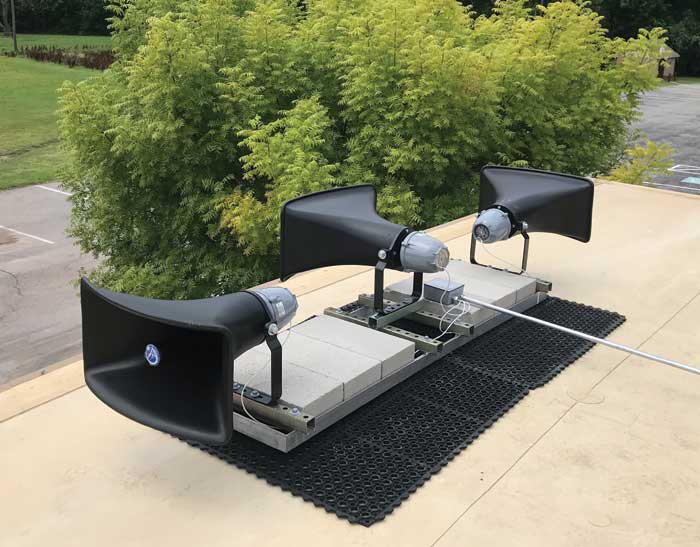 Early carillon speakers were five to six feet long and required a fair bit of space to be able to point a speaker in each direction.

The reflex horn design involved folding the trumpet-like traditional speaker into sections. By folding the horn shape inside of itself, a more compact footprint could be obtained.

Additional power could and still can be obtained by adding adapters to the backs of reflex horns to mount multiples of speaker driver magnets. One speaker can conceivable have up to four powering driver magnets on the back of each horn.

These harps were essentially electronically amplified small vibraharp bars. The harp unit was typically in a forty-nine note format with a few exceptions at sixty-one notes.

The round bars were struck in the same way as their conventional units but the sound was fed into a unique tube-powered amplifier that contained an electronically generated adjustable tremolo.

Many of the carillon recordings made for electronic record and tape players had the harp in accompaniment unless otherwise specified. 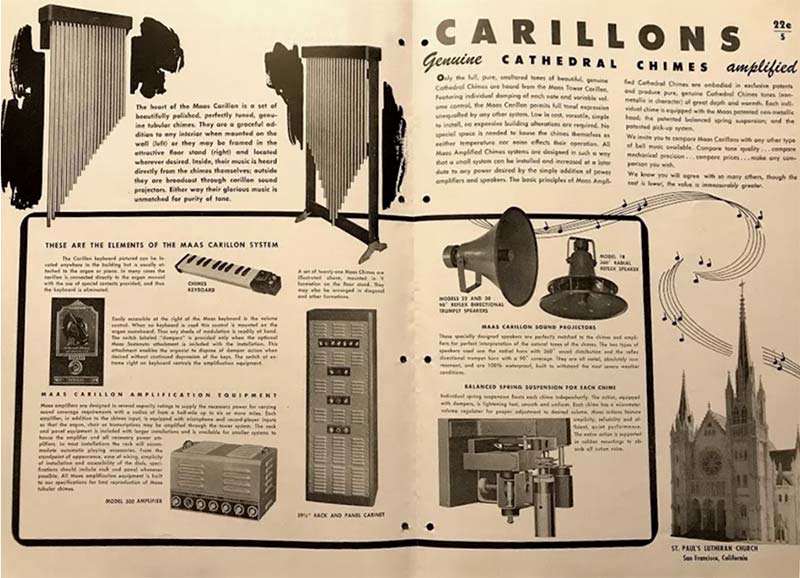 Every electronic carillon manufacturer documented in this history had some sort of optional automation system. The simplest systems typically provided only a simulated swinging bell that was programmable for Call to Worship or Sunday School.

The typical next upgrade provides programmable Westminster Chimes or hour strikes. Nearly all of these basic automatic clocks used a 24-hour dial with metal pins to actuate the circuits necessary for a timed ring.

The most complicated electronic carillon automated systems typically used punched paper rolls to play the carillon instruments in live form. One company actually took automation to a new level by introducing a way for a carillonneur to record keystroke information on magnetic tape for the mechanical clock to trigger for automatic playback. 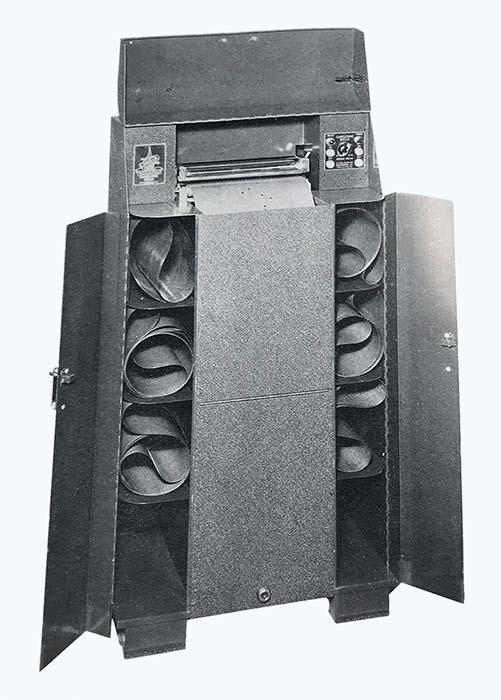 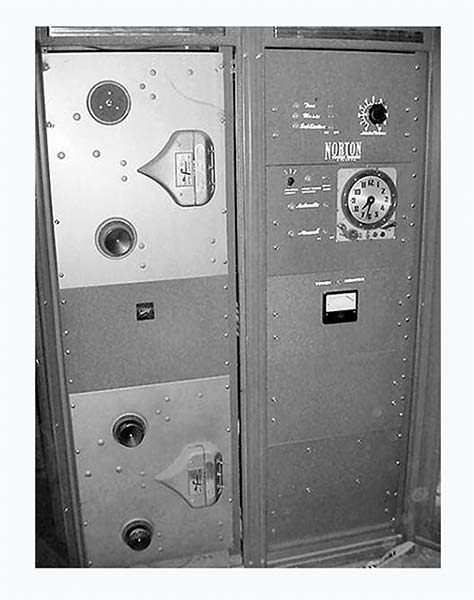 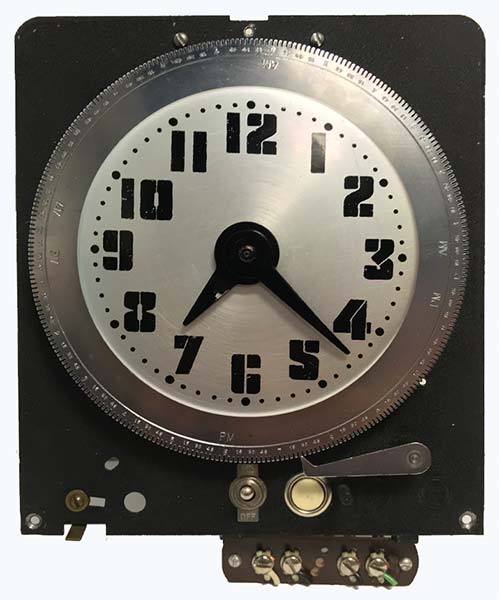 The evolution of the electronic carillon truly gained momentum with the advent of magnetic tape recordings. Most automatic players of carillon pre-recorded carillon music were record players.

The nature of records in the 1940's and 1950's inherently had compromised fidelity. In addition, the regular playing of the records caused them to wear down from needle wear. Snaps, crackles, pops, and skips were common.

Later, reel-to-reel with automatic return and eight-track continuous spool cartridge systems were created. Many of these systems still function today. The cartridges often utilized magnetic foil to trigger a sensor indicating the end of a song.

One company’s tape players detected the absence of music to activate their trigger. Many of the tape-based carillon systems employed a counter that could be adjusted for the number of songs that were to be played.

The cartridges were formatted in such a way that each contained a predetermined quantity to be played. A technician recording the music from master tapes would add the magnetic strips in the proper location for the automatic player according to the order that they received from the customer.

Later tape units evolved into cassettes. These units were often notoriously unreliable. Ironically, many of the older, larger tape units are still working while the younger cassette decks are defunct. The larger size simply made the units more reliable and easier to maintain.

Many of the carillon systems allowed for multiple tape decks allowing for many songs and applications to be played through detailed programming of the automatic clock.

Inside a continuous spooling tape cartridge. 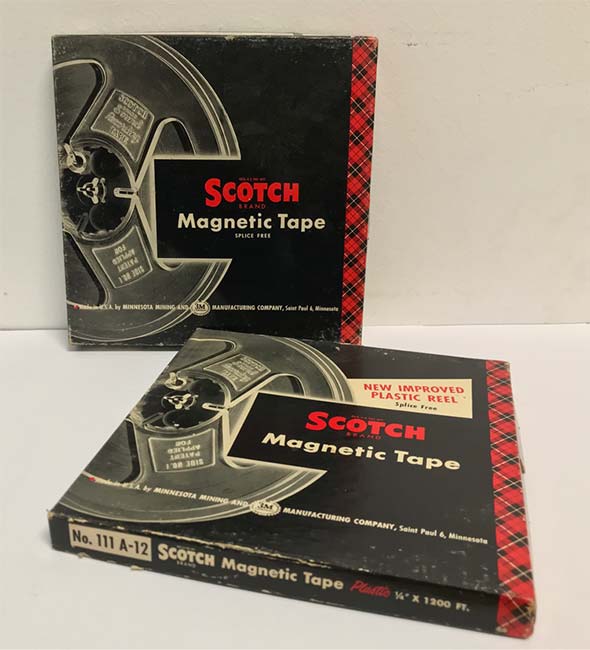 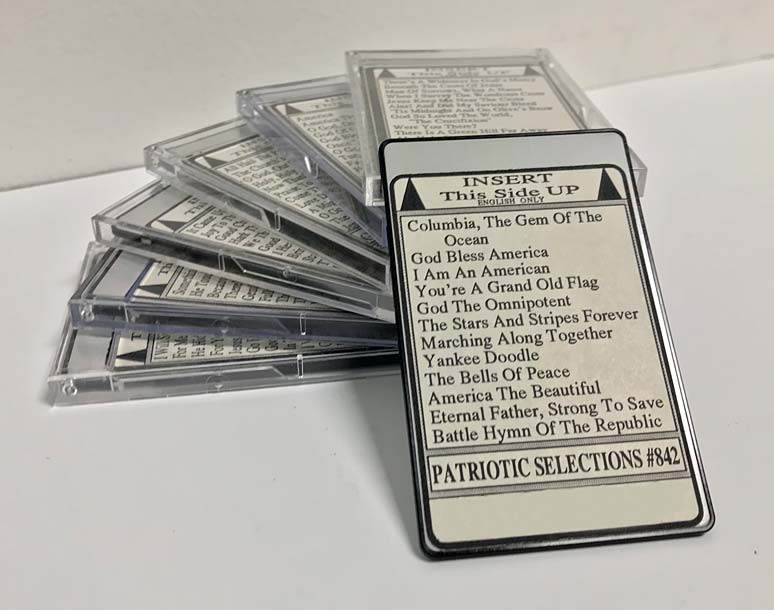 Carillon companies often provided their carillonneur to record custom pieces of music such as collegiate Alma Matters. In addition, some customers used carillon systems to play TAPS for military and memorial applications.

Some carillon systems were even used for tornado and civil defense warnings by playing prerecorded siren sounds on separate magnetic tape cartridges.

Most of the electronic carillon systems provided for a monitor speaker located on the primary cabinet as well as a sanctuary speaker located typically in the organ loft.

The interior speaker was typically capable of being actuated from the keyboard location with optional volume control for adjustment. Having an interior speaker provided multiple solutions to issues. It allowed a keyboardist to practice without being heard outdoors.

The speaker allowed realtime monitoring of carillon projections by mirroring the outdoor speakers. It also allowed the audience and congregation members to enjoy the tower bell sounds indoors.

Disclaimer: In developing this history we were careful to pursue due diligence and omit manufacturers names with live trademarks at the time of publication as best as could be determined as of 08/18/2020. Should a registration status change, please contact us.

The original draft of the electronic carillon history was an extensive documentation of which companies developed which technologies and when. We appreciate the lineage of experimentation and innovation by those who came before us.

The owners, managers, engineers, musician, and technicians that innovated new sounds and new technology are truly to be admired and appreciated. It is American ingenuity at its best.

Feel free to contact us for specific questions regarding a vintage carillon model and the upgrades that we may offer for it. 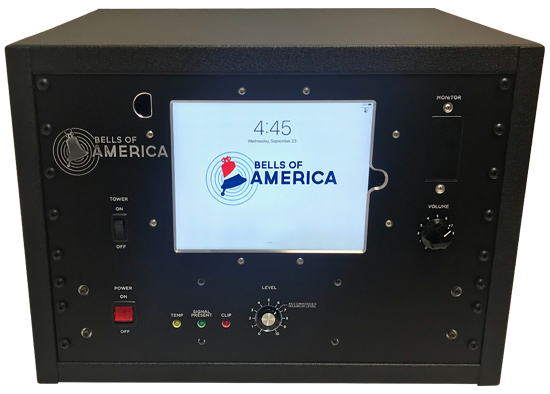 Bells of America has used its extensive experience with vintage carillon units to develop a digital carillon upgrade with touch screen technology paired with an amplifier that can power nearly any vintage electronic carillon unit in any speaker configuration.